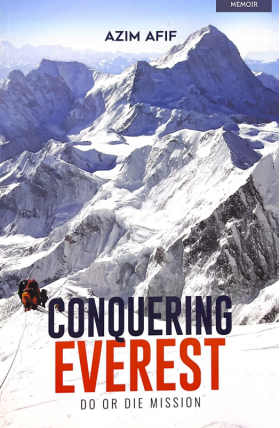 A young mountaineer embarks on a challenging mission to reach the peak of Mount Everest. Extreme cold weather, the dangerous climb up a tough mountainous terrain, risk of avalanche, thinning oxygen supply in the atmosphere at higher altitudes were among the numerous challenges awaiting them. Many climbers have lost their lives while making their attempt to reach the peak of the highest mountain on earth. There were also others who died while descending the mountain. The Everest is not a place for those who are afraid. At the altitude of 8,848 metres, climbers enter the death zone where bodily functions could deteriorate leading to certain death.

However, for Azim Afif Ishak and his team from Universiti Teknologi Malaysia, nothing is impossible. Since 2011, they planned the adventure that would bring them on a perilous journey. In 2014, their first attempt to conquer the peak was hampered by an ice avalanche in Khumbu Icefall. At least twelve Sherpas died. Azim and his team returned to Malaysia disappointed, but luckily, unharmed.

However, this was not the end. Azim and his team refused to surrender. They must conquer the Everest peak. No matter what happens, Azim was determined to wave the Jalur Gemilang at the top of the highest mountain.